Charlotte was raised by her father and only older brother. She spend most of her time on the family freighter until the age of 18, when she applied for Starfleet, and failed to meet the requirements. She loves space travel and when her father retired she applied again only to be rejected, and decided to enlist as a crewmember to get back in space after her father retired. She spent some time on Starbase 118 before shipping out with the Aurora. She has picked up a lot from some of the travelers that they would ferry from place to place, and while not fluent in anything other then Federation. She could probably insult you in many different languages, if you got on her bad side. That said she has some working knowledge of a of different languages from the changes in the crew over 18 years. She has had some trouble taking commands in the past. On the freighter if you got it done, fine, but there was no rush about it. She is great in a crisis, and that is where her strength lies. Father was a laid back captain, and had trouble with those that can not relate to that style of command. 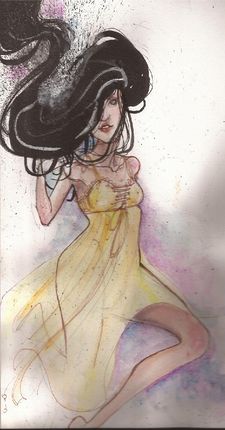 She spend two years as a crewman 2nd class rising the rank of 1st class.

She is good with a hand phaser, or her own personal weapon, an old Klingon disruptor, that was given to her by her father.

She had developed friendships with LT. Cmdr. Matthews who is now been transferred and the two wild women Ensign Peiy and Ensign Penny. Charlotte doesn't care too much about rank, trying to be friends with everyone. A one time she had developed quite a taste for Romulan ale. After the recent events of the mission on 'Eden' she had developed a working friendship with Lt. Commander Eerie.

On the Avandar and the Vigilant she was in tactical/security office assisting with the various reports and memos that are always coming and going. She particularly does not like to be on the bridge. It was a bit too formal up there for her tastes. But now works effectively on the bridge.

With her transfer to the Vigilant she as had to learn a whole new crew. However, this is something that Charlotte loves. Social interaction. She has had the opportunity to be assigned to several away missions, and preforming well. She has spend some time socializing on board. Developing a friendship with now Captain Greir while they were on shore leave on Deep Space Six. She also enjoyed the company of Ola Naran, who works with her in the Security & Tactical Department, but has now been transferred over the Deep Space Six. She was sorry to see Captain Reinard transferred but happy to know he has his own command.

For a while she was dating Lt. 'Ox' Brown of the Marine detachment on the ship, this ended when she was training on Deep Space Six, and on her return he had been assigned elsewhere. With her promotion to crewman 1st Class she had applied for Starfleet academy and has been accepted as a Cadet for the academy. She has completed her basic classes at Deep Space Six. She is now a cadet 4th class.


On Deep Space Six, she had to buckle down and spend time learning the way of an officer. She has decided that she is going to make it as an officer some day, and has been on the 'wagon' forgoing any alcohol. While on Deep Space Six, she ran into her brother 'Rex' who is now taking the family shipping busy in the near by sectors.


Charlotte had decided to make her focus of study engineering. She will continue to take courses on the Vigilant which will gives her a lighter duty schedule on the ship. She was surprised to find Lt. Brown transferred when she arrived back on the Vigilant. She has sworn off marines until the next totally irresistible comes on board. She is thinking about making intelligence as her minor, this as the urging of Lt.Cmdr Zehn, Chief of Intelligence on the Vigilant.

Recently she was just transferred to the Vigilant-A.