Located on Deck 14, Main Engineering is the ‘heart’ of the ship, comparable to the bridge as the ‘brain’. It has access to almost all systems aboard the starship, and manages repairs, power flow, and general maintenance.

Entrance to the primary engineering spaces is provided by two large blast doors, a pair each on decks 13, 14, and 15, that can be closed in cased for internal or external security reasons, as well as in case of emergencies. 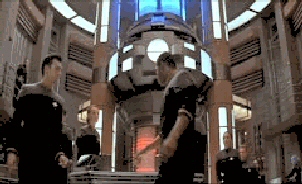 Just inside of the doors on deck 14 - Main Engineering - is an observation area where technicians monitor various systems of the ship. Also in that area, is a floor-mounted situational display similar to the Master Systems Display found on the Bridge. Affectionately referred to as the ‘pool table’, the Chief Engineer can use the display to more easily get a broad view of the situation with just a glance.

Farther in from observation area is the warp core and main control systems. Circular in shape, the room is an outgrowth of the Galaxy Class design, but exceedingly functional to save space inside the ship. Usable consoles are mounted on every piece of ‘real estate’ around the circumference of the room and provide primary control access for the engineers and technicians. Additionally, there are numerous ladders and access panels to Jefferies tubes, leading throughout the starship - the Sovereign Class being the first series of starship to take full advantage of these access spaces for more than extraordinary maintenance. The technical complexity of the starship dictates the use of these spaces to maintain peak efficiency and affect proper repairs.

Off to the starboard side of Main Engineering is the Chief Engineer’s Office, which is equipped with a diagnostics table, assembly and repair equipment, a small replicator, and a personal use console with built-in private viewscreen.

In the center of Main Engineering is the Matter/Anti-Matter Assembly (M/ARA). This is where primary power for the ship is generated inside the Matter/Anti-Matter Reaction Chamber (M/ARC). This system is checked on a regular basis due to its importance to the ship. Access to the warp core is restricted, with a front port to get to the Dilithium matrix as well as an over side port for access to the warp plasma conduits.

A second tier rings the second level of Main Engineering on deck 13. Two small single-person elevators, as well as a ladder on the opposite end, provide access to this catwalk. Controls for the various Fusion Power Plants, along with the Impulse Engines, are monitored from this deck.

Access to the Jeffries Tubes is provided in various places on both the First, Second and Third Tier of the Engineering Spaces.

Typical crew compliment in Main Engineering consists of twenty engineers and forty technicians of various grades. During Red or Yellow Alert, that number is increased.

Number of computer cores: Two: The primary core one occupies space on decks 7, 8 and 9 far astern. The secondary, emergency core is much smaller than the first and is located adjacent to Environmental Control on Deck 16.

Type: The updated Computer cores found on the Akira class are newer versions of the Galaxy Class Isolinear Processing cores. The system is powered by a smaller, regulated EPS conduit directly from the warp core. Cooling of the isolinear loop is accomplished by a regenerative liquid nitrogen loop, which has been refit to allow a delayed-venting heat storage unit for "Silent Running." For missions, requirements on the computer core rarely exceed 45-50% of total core processing and storage capacity. The rest of the core is utilized for various scientific, tactical, or intelligence gathering missions - or to backup data in the event of a damaged core.

Acronym for Library Computer Access and Retrieval System, the common user interface of 24th century computer systems, based on verbal and graphically enhanced keyboard/display input and output. The graphical interface adapts to the task which is supposed to be performed, allowing for maximum ease-of-use. The Akira Class operates on LCARS build version 5.2 to account for increases in processor speed and power, and limitations discovered in the field in earlier versions, and increased security.