Primary operational control of the Sovereign class is provided by the Main Bridge, located at the top of the primary hull on Deck 1. The Main Bridge directly supervises all primary mission operations (with the exception of the Flight Bay and assorted craft) and coordinates all departmental activities. 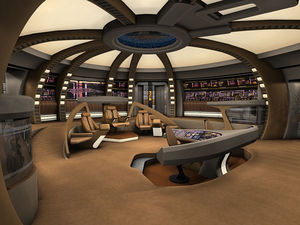 The Bridge of the USS Challenger

The primary Bridge configuration of the new Sovereign class is slowly becoming one of the standard bridge designs for fleetwide application in newer starships. The central area of the Main Bridge provides seating and information displays for the Captain and two other officers. The Captain’s Chair is raised from the rest of the Bridge Officers, to that of the Surrounding level which includes Tactical and Operations. The two Officer seats are equipped with fully programmable consoles for a variety of uses.

To the port side of the Flight Officer, also facing the main viewer, is the Operations manager's console - which is identical in size and design to the Helm station. The Operations Panel, due to the tremendous amount of sensitive information found there, has security protocols as stringent as the Tactical consoles.

At the very front of the Bridge chamber is a large viewscreen. This main viewer performs all the standard duties expected of it. However, the viewscreen is not always activated like most other starships. It is a full holographic display, that can be activated upon request. When the screen is not active, a standard bulkhead is present. This addition was made into the Sovereign class, so that Star-Field Syndrome among Bridge officers would be stopped. Too many officers became hypnotized during warp.

Aft and port of the command area is an elevated platform on which is located the Tactical/Security control station (comprised of two consoles, one for Tactical, and one for Security, located directly fore of Tactical and starboard of the Helm station). These consoles are to the starboard side of the Captain’s Chair, no longer in the direct middle.

To the Captain's right, behind Tactical I, is the Mission-Operations section of the bridge. Located here are three additional, fully-programmable multi-mission consoles. Facing out toward the view screen is the Tactical I and Security I stations.

Against the starboard side walls of the main bridge are the consoles for Sciences along with others that are programmable for a multitude of functions. There are two Science consoles with Science II being a fully programmable multi-mission Console. Science I, which is the primary science console, has priority links to Conn, Ops, Tactical and the primary computer core. The Science I console is located directly to the Captain's port side.

Science II is the ASO's (Assistant Science Officer's) console, which can be used by all personnel. Science II has access to all science, navigational, sensor, and communications systems. Science II can be configured to operate in tandem with Science I, although security links and all other non-science data is withheld from Science II. Science II usually works independently of Science I, and is located to the starboard of the main station. 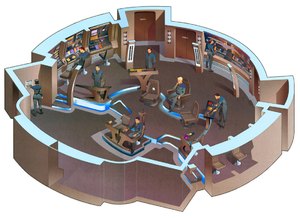 Located against the aft wall of the bridge is a large master systems display monitor, similar to the one in Main Engineering. All relative ship information (such as damage, power distribution, etc.) is displayed on the cutaway image of the vessel. This monitor can be used to direct ship operations and can be configured for limited flight control if necessary. Also located against the aft wall of the main bridge is the large Engineering console. This has a smaller cutaway diagram of the vessel, which displays all engineering-relevant data and shows warp fields and engine output. This console also has priority links to the computer cores, the WPS (Warp Propulsion System), the IPS (Impulse Propulsion System), navigation, SIF, and IDF. Although usually unattended, the Chief Engineer can full enable this console with all control functions by entering voice codes and undergoing a retinal scan. Alongside this console is the Engineering II console, which is fully programmable to run any secondary function, including Sciences, Medical, Operations, Limited Helm control, or Security.

This console, as does every console on the bridge, also has the hand-input sub-console for use in setting the self-destruct of the vessel. The self-destruct sequence follows Standard Starfleet security procedures which can be accessed via any secured Memory Alpha ODN connection.

There are two turbolifts on the bridge that can handle normal transit around the Sovereign class. There is also one door, on the aft platform of the bridge, that leads to the Briefing Room (otherwise known as the Conference Room or Lounge), which is directly aft of the Main Bridge. Other connected rooms to the Main Bridge include the Captain's Ready Room. There is also an emergency ladder that connects the bridge to Deck 3.

There are no escape pods connected to the bridge. Pods are located on all decks below Deck 3. Two pods are reserved for the top four officers in the chain of command on the Sovereign class, because they are the last four to leave the ship. These are located on Deck 2. As the number of experienced Captains dwindles in Starfleet, the notion of a Captain going down with his ship has been abolished. If the ship is abandoned, the top four officers in the chain of command will wait until everyone else is off the ship, opt to arm the auto-destruct (not always necessary, but there if needed), and then leave in the two escape pods.