Ensign Cassandra Mason, MD is currently serving as a Medical Officer aboard the USS Arrow. Fresh out of Starfleet Medical Academy, it is her first station aboard a fleet vessel.

Being a new officer aboard the ship, Cassie's shy nature has prevented her from making many friends thus far. Slowly but surely, the close knit, small crew of the USS Arrow is cracking her stern exterior.

Due to the high stress she puts on herself, and the stress that comes with intensive training to become a doctor, Cassie has developed some compulsive behaviors; organizing, color-coordinating, as well as other minor anxious habits. It is because of her need for organization and neatness that she can be rather finicky in details, as well as be perceived as "high maintenance."

Cassie spends most of her free time reading. Her favorite genres are fantasy and science fiction. Poetry, from Earth and other Federation planets, is also one of her favorite reading materials. Her love of reading inspired Cassie to becomes interested in the skill of bookbinding, a unique and antiquated hobby that she considers just as valuable a skill now as it would have been centuries prior.

Knitting and sewing are also favorite pastimes, because the repetitious motions can be calming. She also enjoys gardening, though hasn't been able to do it much while in the Academy. Being surrounded by plants she's grown herself reminds her a lot of her mothers' garden back home. Occasionally, Cassie will enjoy hiking, though she's always sure to bring a fully equipped Medkit in case of emergencies.

Gifted to her after graduation, Cassie's African Violet was the first decoration placed in her quarters once assigned to a ship. She's extremely fond of the little plant, and affectionately named it Gerald.

As a baby, Cassie was adopted by Sana Mae Safi, a child therapist, and Dr. Rin Mason, a pediatrician. As a result of the two women being a same-sex couple, all three of their children are adopted. On several occasions, Cassie has credited her desire to become a physician to her mothers and their dedication to their work as well as the health of their own children. 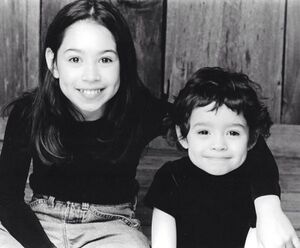 During her childhood, Cassie was often found in her mothers' backyard. Sitting under the draped canopy inside the small greenhouse, she read as many books as she could get her hands on. To this day, Cassie's love of reading is something she prides herself on and does as often as time allows.

Older brother, Alexander, lives in Spain with his partner and son, working as an Ambassador in the United States Embassy in Barcelona. Younger sister, Beatrice, is a graduate student at New York University.

Despite her goals of wanting to be a physician, Cassie did not always see herself working for Starfleet. It was her first year of college that Cassie broke up with her high school sweetheart, just several months after becoming engaged. The sudden loss of one of the most important people in her life led Cassandra to think more about what this meant for her future. The more she focused inwards, the more the shy bookworm in her desired adventure and travel. As soon as the thought of Starfleet crossed her mind, the more it seemed like the only option.