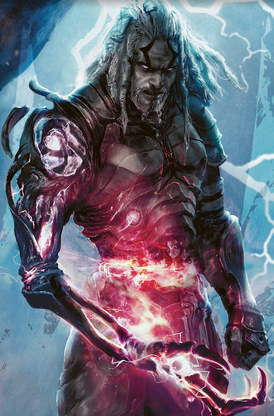 On star date 239011.07, Starbase 118 Ops was struck by a giant ion storm, seemingly with a mind of its own. In fact, it was comprised of four separate storms, each one housing a primal entity relating to one of the basic elements - earth, air, fire and water.

These beings hammered their way through the station shields with ease, causing massive disruption as they took up residence in the four fusion generators, using the power grid to spread their influence across the entire facility.

Shortly after the collapse of the base's shields Douglas Hardy was crushed by Brine and dragged into the depth of his 'birthing chamber' deep in the Dungeon where he was selected to be Brine's mortal champion ready to do battle with the other elementals.

Due to Douglas's resistance, he lost all of the flesh and muscle on his right arm and the synthetic skin on his left side, while Brine 'persuaded' him.

Brine has shown himself to be a very calculating individual. He quickly allied himself with the crew of Starbase 118, intending to manipulate them to give him an advantage in his quest. So far, with thire assistance, he has defeated Chan, Element of Air. While in battle, he is ruthless and merciless, much like the sea at storm.