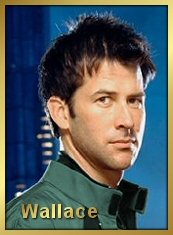 Brikk has a genuine Marine build. Working out to keep his body in good condition. He is quite tall and has a massive wingspan. He always seems to sport a half cocky smile.

Brikk was born on Earth to then 1st Lieutenant Reese Wallace a young officer working in the field, and 2nd Lieutenant Jennifer Ford, MD. They had met while serving together on Vulcan. Six months after the birth of Brikk, they were wed. They remained stationed on Vulcan until Brikk was 5, Jennifer pregnant with her second child transferred to the USS Washington, with Reese not far behind. Jennifer gave birth to another baby boy, Benjamin.

They stayed with their parents on the Washington until Brikk was 15. He and Ben moved with their grandparents in San Fransisco. Where he attended school and then went to college on Betazed, then the Marine Academy. He graduated with honors in the Intelligence field, along with Command. His father, then Brig. General Reese Wallace delivered the commencement speech. Brikk took his first post at StarFleet Intelligence working as Marine liaison. He worked there throughout the Dominion War, where he had lost both parents, when the Washington was destroyed trying to re-take DS9. Itchy to get out in the field he put in for a transfer, and ended up on the USS Challenger. Serving as Marine Intel Officer, he coordinates recon flights, analyzes data, gives intel reports to field officers as well as command. He had access to TOP SECRET files, even Captains don't. His job is to protect the Federation at all costs, he provides necessary intel to carry out various missions.