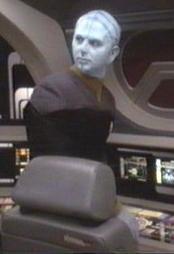 History: Brell suffered serious damage to his arm from an "Accident" at age 15. The ER doctor believed the wound was the result of a knife fight. The damage was healed and all that remains is a scar, in which dermal regeneration can not correct.

In the next two years Brell found himself gaining a reputation as the man who could steal anything. He lived a comfortable life preying on tourists. Then he was approched by the orion syndicate who were in need of his talents. He quickly built up his worth to the syndicate obtaining whatever they asked him get, at whatever the cost, though he never found it nessary to harm anyone or cause much damage he would slip in find his objective then slip out as easy as he came. But it was when he was asked to break into the home of a starfleet officer and steal a PADD containing information on upcomming raids. He was to follow the officer's son Jason and use the boy to gain entrance. Brell tracked Jason to his home but the human saw him and ended up inviting him in egear to make new friends Brell almost went through with robbing him, instead the two boys ended up talking and talking he opened up and when the boy's father arrived The man reconized Brell from a security report and nearly took him in to starfleet. Brell felt remorse for what he was sent to do and gave himself up. Jason's father Lt. Ranson was starfleet security and took pitty on the young bolian and insead of taking him in, tolk him that if he helped uncover the syndicates operations on Bolarus, make amends to those he had robbed, and go home to his family that he would be arrested.

Brell did what he was told in fact he did it in record time, he found and returned all of the things he had stolen and worked off those things he could not return. He lived with Jason and his father while he worked to repay those the had wronged. Thanks to Brell's help starfleet was able to arrest several members of the orion syndicate, with precautions taken to make sure they could trace the arrests back to brell, it was time for the seventeen year old to return home. Lt. Ranson went with him that night and told his parents about what brell had done and then what he had done to make amends. He was welcomed back into the arms of his teary eyed mother overjoyed that her son had finally returned. The next few years Brell spent with his family working with his co-father, and growing closer to his siblings, he and Jason kept in close contact. Then the dominion war broke out, betazed fell to the enemy and the Bolarus sector became a battle front, Brell wanted to enter Starfleet to defend his homeland but due to his past it took him sometime to get approval to join. With Lt. Ranson's support he was granted a position in starfllet academy During the final year of the war, it may have been starfleet was willing to give him a chance or that they were desperate for new recurits.