From 118Wiki
< Kevin Breeman(Redirected from Breeman, Kevin/Logs)
Jump to navigation Jump to search

This page isn't going to be a series of log entries per se but rather a series of small blurbs describing what Breeman has been up to lately outside of his daily work. 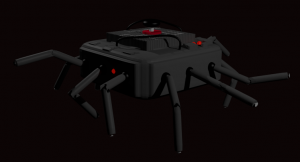 Before the official promotions banquet Kevin started looking at some borg nano probes he'd received from an officer aboard the USS Avandar. To the right is an image he took of one of them while he was programming it.

I thought I'd write this one as Breeman's writer. Every now and again in our simming the topic of astronomical distances comes up. With warp speed our ships and shuttlecraft don't have quite as much of a problem travelling the insane distances involved in space travel. But it's easy to forget that objects that don't have their own warp fields still do have to deal with these distances. So I thought it would be cool to put up a few facts about how vast and empty space is just to keep things in perspective and prevent the "conveniently close planet" trope [1]

Light speed is the ultimate speed limit in space, outside of warp. Nothing can exceed that speed and still have a mass. That means an electron or a neutrino MUST obey since both have a small mass (very small). Anything that goes above light speed without creating a warp field for itself breaks this law and pays a heavy price. Specifically its mass becomes infinite.

Just for fun let's imagine we have a railgun that shoots slugs at a velocity of 25% the speed of light. So in other words a bullet from this gun travels at 75000 kilometres per second (or about 46000 miles per second).

Let's start with some short distances. An Astronomical Unit (AU for short) is about the distance from the Earth to the sun. That is 149,597,870,700 meters, or about 93 million miles (see Wikipedia).

This distance looks quite large but really it's quite close. It only takes roughly 8 and a half minutes for light to make the trip. That means that if you were on Earth watching a solar flare on the sun through a telescope you would be viewing the sun as it was 8 minutes ago. Our railgun slug will take four times 8 minutes, so 32 minutes, to reach the sun if fired from the Earth (ignoring the accelerating effects of the sun's gravity of course).

Let's talk about a few of our Sol system's planets. Jupiter is just over 5 AU from the sun. That means that at its closest Jupiter is roughly 4 AU from us. In other words light leaving Earth takes just over half an hour to reach Jupiter. The railgun slug will take 2 hours. The distance from the sun to neptune is about 30 AU. In other words light takes four hours to get from the Earth to Neptune at its closest. The railgun slug will take 16 hours.

If it only takes light 8 minutes to travel a 93 million miles (one AU) it takes it one year to travel a light year. Now putting things further into perspective one light year is over 63,000 times the distance of an astronomical unit.

To reach one light year our railgun slug will take four years. And once you have travelled this distance you still need to do it again 3 times before you get anywhere near another star.

Coming back to 21st century terms of today, the fastest spacecraft we've ever built clocks in at about 70 kilometers per second [2]. Needless to say that's nowhere near as fast as the railgun slug we've been talking about, much less the speed of light. And even if it had been pointed out to another star it would take over 17000 years for that spacecraft to reach our closest star.

Nothing is Ever Stationary

One other thing to keep in mind is that there is no such thing as a stationary object. It is ALWAYS moving with respect to something. This can sometimes be surprising when you're writing about objects moving at high speeds. For example, if you were flying in a shuttle craft at impulse beside an asteroid moving at several million miles per hour in space it would look to you as though you were just floating there beside the asteroid, and the two of you were stationary. In fact though you would both be moving beside each other at an obscene speed.

This may seem unnatural but think about your current circumstances. If you were standing at the equator of the earth you would be moving in a circle (being dragged along by Earth's rotation) at just over 1000 miles per hour. Not only that but no matter where you are on earth, you're being hurled through space at over 66000 miles per hour because of the Earth's orbit around the sun. You don't notice that because you're stuck to the planet and you have to move with it. Forgetting the earth for a moment, the entire solar system (including you) is moving through space at around 560 million miles per hour ([3])