Bodhisattva of the Void 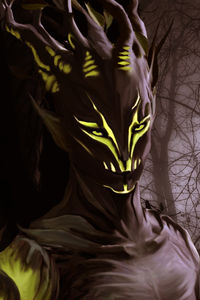 Bodhisattva of the Void was the chosen name of the Community representatives who made contact with the USS Garuda in response to that ship's arrival at the Zeta Equulei system. As the Community possess a collective consciousness, the Bodhisattva’s function was to facilitate communication between Garuda and the Confluence - the group mind.

Bodhisattva was comprised of several thousand individual Community lifeforms described as intelligences, which were used to control the functions of a single, crude humanoid body constructed from organic plant matter in a manner similar to Community starships.

Eventually, Bodhisattva invited the Garuda to send an away team to the surface of the Community’s home moon. There, they facilitated a telepathic connection between the Confluence and three members of the Garuda away team, Lieutenants Evan Delano and Mei'konda, and Ambassador Lily Ventu via ancient Menthar technology. Soon after, rising escalations with the Myr Luuk forced Garuda to withdraw.

The Community was changed by the contact it had made with the Garuda away team. While the Myr Luuk sought and eventually received an alliance with the Cardassian Union, the Community took steps of its own in establishing a diplomatic rapport with other powers in the region, particularly the Federation.

On stardate 239112.16, the Bodhisattva arrived on USS Garuda to participate in a joint scientific study of a large protomatter cloud located several light years from Deep Space 10. Although the physical characteristics of the Bodhisattva had changed, the greater change was in the Community representative's personality, which now reflected a distinct curiosity for both day to day life among humanoids, as well as the scientific venture at hand. It was on this date that the Community also established telepathic contact with Raissa Moonsong via a specially developed conduit intended to serve a buffer between the Community and a humanoid telepath.

During the survey of the protomatter cloud, an entity known as the Kindred influenced all plant life on Garuda, including the Bodhisattva's plant-based body, to change. Although the intelligences contained within were unharmed by the transformation, but Bodhisattva’s body was disfigured and made stationary. Over time, speech also became difficult. Through a connection with Moonsong, the Bodhisattva was able to assist in establishing telepathic contact with the Kindred. The intelligences that comprised Bodhisattva left the ship several days later, leaving their still deformed body behind, along with several hundred intelligences, who were left in the care of Moonsong.

Several weeks after the diplomatic mission to the protomatter cloud, the intelligences that had comprised Bodhisattva returned to the Confluence. Although many of the those intelligences joined others that would make up the Community’s ambassador to Astrofori One, the Voice on the Horizon, others remained in the Confluence in order to provide a perspective on the outside world to the group mind.