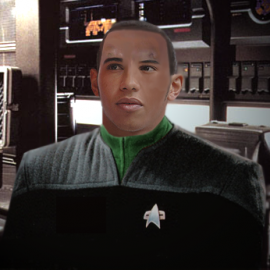 Sergeant Beornan Oumriel, a Haliian, is currently serving as a Marine Officer on USS Avandar.

Beornan comes from a military family where many of his close relatives serves in the planetary military defence forces or StarFleet. As a child Beornan was always tinkering and building small robotic vehicles and gadgets to play with. When at school he excelled in mathematics, physics and engineering classes. He also found someting of a love for art and architecture as someone who loved to design and build things as much as fix and maintain them. Beornan always wished to follow suit and join the services like so many around him and originally intended to enlist with StarFleet as an engineer. After watching a presentation from a squad of marines doing a recruitment drive in the local area he decided to enlist with them instead and was trained as a combat engineer.

Through his training and work in the special ops team on the USS Avandar and due to the nature of the job Beornan has become close friends with his teammates but most especially Griffon. They two enjoy a good mess about and laugh together while off-duty and enjoy good spirited banter and silliness. During a mission that saw their ship crash land on an M-Class planet the pair ended up having a friendly rivalry over Charlotte one of the tactical officers.

Rirtuil is adept a marine as any and recieved all the basic and advanced training that any marine would recieve.

Beornan's training as a marine focussed on being a combat engineer to support special ops and infiltration operations. Where many marines would use their offensive might to solve a problem he has a different approach. He is a techy, geeky guy with a love of computers and programming. He can use his knowledge of technology and gadgets to infiltrate secure compounds without alerting security and can extract well protected information and items from secure facilities.

As a combat engineer Beornan can build structures and facilities on the ground, such as mines, turret placements, weapons, compound defence walls, weapon gantries etc. He also has an excellent understanding of hacking, computer languages and AI, electronics, cybernetics and robotics, mechanics etc.