From 118Wiki
< Baylen Anders
Jump to navigation Jump to search

Baylen enlisted into Starfleet and went to the Yeoman's Academy in Atlanta GA. After Basic Training at the Defenses Force School, he went into what is called A shcool, at the Yeoman Academy Training Center for a ten week course. After his graduation he moved back to New Orleans and worked in the Command Center for Planetary Defenses.

Being at the CCPD he was able to track a lot of info, he still loved and longed for Ben so he would check from time to time to see where the Livingston was. He noticed that after a year or so he stopped checking and started moving on.

While in his role as a Marine Core Lt. General General aide, he attended Louisiana State University (LSU) Geaux Tigers... He graduated with honors in Public Administration. This degree entitled him to a shortened stint at the Academy. He requested to attend the Academy and was granted admission after Lt. General Paul Housman wrote and letter of recommendation. 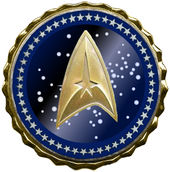 Baylen got to work with a lot of Ambassadors at the Command Center for Planetary Defenses. At anytime of the day there is from anywhere between ten to twenty Ambassadors there and there are also four permanent Federation Counsel Members that manage the day to day operations of the Command Center. After to Dominion War, the Federation took Command and Control of Planetary Defenses out of Star Fleets control. It now ran by a political body. Baylen was assigned to a Counsel Member General, He work with her for almost a year until she returned home to Bajor, then he started working with her replacement to bring him up to speed. Baylen really enjoyed his time at the Command Center for Planetary Defenses in the French Quarter of New Orleans, It kept him close to home and he got work with a lot of the who's who of the Federation and learned a lot about different Command Styles.

While Stationed at the C.C.P.D. Baylen learned more about diplomatic diplomacy then he could have ever leaned with ten years at the Academy just studying Diplomacy. So when he decided to join the Academy Baylen was a bit sad to be leaving such a great place behind but he did have high hopes that he would make it back to C.C.P.D. someday. Maybe even as its Star Fleet Commanding Officer and Chief of Staff. The thing he will remember most is Giant Block of Cheese day hosted by Councilmen Ford, once a year. Bringing in anyone and everyone once a year and letting them have the ear of the Command Staff. 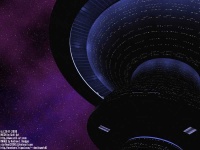 As a new Ensign Baylen was ordered to Outpost Ganzera and became the Strategic Operations Yeoman. He was attached to Commander James Lonny. He learned a great deal from the commander about fleet Operations and Mission Readiness. Baylen took it up extra flight officer classes from one the pilots while he was off duty. He also spent a lot of time in the Holodeck running Tactical Readiness Drills. He hated not being the best at something and could not stand to disappoint a Commanding Officer. After a year at the station he was noticed by the Commanding Officer Rear Admiral Lower Half Hathoway, Baylen was promoted to Lt. JG and made the Junior Deputy Aide to the Admiral.

He was a shinning star on the Admirals Staff and was quickly made the Admirals personal aide. While on the station he meet Lt. Commander Ian Lane West, while he was there TDY working on the Biological Weapons Program.

They became friends quickly and when Ian was transferred to the USS Gemini from the USS Tiger-A, he pulled a few strings and Baylen was promoted to Lieutenant and was back to working in Strategic Operations on Outpost Ganzera. After a year they both transferred to the USS Atlantis, Baylen became the Chief Yeoman and the personal aide to Captain Raj Blueheart. He stayed his aide for a little over a year and then was Transferred to Star Base 118 Operations to become the Chief Yeoman of the Operations Base. This however was short lived, Baylen was asked to fill the role of Mission Specialist by Sal Taybrim. This role is Baylen's first role as a real Command Officer. Baylens first Mission in this new role was not an easy one. They where to hunt down a Star Fleet Captian, Captain Haz Arrhimen of the USS Stormcrow, that wanted to start a war with the Romulans. So Baylen's first role as the Star Base Mission Specialist was not on the Base at all, but rather on the USS Albion, an Excelsior Class Starship used for support mission. The Albion was under the Command of Acting Captain Sal Taybrim. 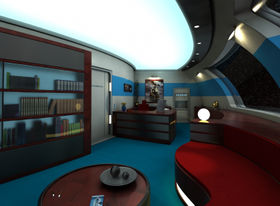 Baylen's Office is located on Deck 7 to the starboard side of the deck in the Command Tower It is housed on the same deck as the Commanding Offers Ready Room and the First Officers Office. There is a second office location for the Mission Specialist in the Fleet Operations Tower, but Baylen never uses it. Baylen has two desk top computer systems, the one on the credenza is mostly for results of test and scans that can tie up his main computer for hours at a time. The One on the main desk is used for everyday duties, reports and research, and other such stuff. The window in front of the desk has a large Master Display Systems that is a holographic projection that can be turned on or off at will. The MDS is tracking in real time the space around the station and other zones that can be changed with the mission specialist input. Baylen does not use the MDS often, mostly just in the early mornings to help him with his reports to the First Officer.

There is one built in book case in the office with sliding glass doors that holds 39 old Poetry and Classic Earth books from the 1800's in it that Baylen collected from shops in the New Orleans behind the sliding glass doors. Balyen also has photos of his family around the office. Along with some Old Risa Sailing Tools and Charts that belonged to his Great Great Great Granddad. In the Windows are some Old History Books and a Mask that He wore to a Party in New Orleans on his first New Years Celebration.

The small table with four chairs in the far corner of the office can often be found with a great many stacks of PADDS laying on it. Baylen has all of his staff turn in there reports via PADD on that table so he can read them and then make his daily report to the Commanding Officer.

Baylen tends to lay out on his sofa and relax to classical music while he reads reports. His office is his sanctuary. When off duty he can often be found here reading a book and drinking a hot tea. 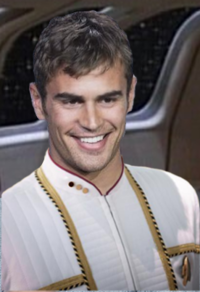 Baylen in his Mess Dress Whites

He makes himself an expert in the current mission. Baylen has become a combination of a science officer and a tactical officer, as the Mission Specialist he researches the mission, briefs senior staff and helps come up with strategy to implement the mission. Baylen always makes sure that the day to day reports and general paper work are logged and filed on top of making sure that the C.O. and F.O. needs are meet. Baylen prides his self on being able to meet the needs of the command staff before they know they have the needs.

Baylen tries to keep regular meetings with the Chief Science Officer and the Chief Tactical Officer. He also meets with Lt. Cmdr Ian West to go over mission resources and objectives. After the first meetings of the day Baylen will work with the Chief of Operations to line up all the resources on hand and makes a plan on getting what they don't have on hand so that the mission can be completed.

After his daily meetings Baylen will return to his office to makes up a situation report (SITREP) and then meets with the Captain and the First Officer to make a report on what is at hand and his thoughts on the needs of the mission. Once the Captain and First Officer has decided on what course and what backup course they want, it is up to Baylen to make sure that Mission has all the support that it needs. Having a Mission Specialist decreases the work load on the Operations Staff, so that they can focus on ship resources, where Baylen focuses on mission resources and Fleet wide assets that can be used to facilitate the mission.