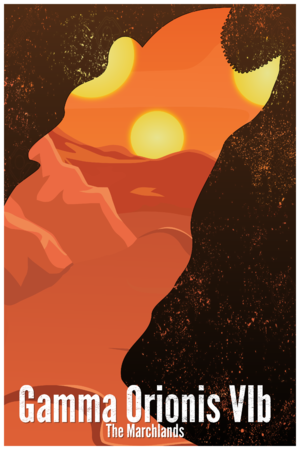 When seismic activities on a desert moon orbiting Gamma Orionis destroy part of a civilian research station, the scientists working there are in big trouble. Regular deliveries of supplies are made impossible by the position of the station in the mountains and the loss of their landing pad. Threatened to starve, their only hope is the crew of the USS Constitution. Equipped with new and updated Argo buggies the crew makes their way through the desert of Gamma Orionis VIb, faces off with Large Aggressive Life Forms and takes on the challenge to reach the scientists before the worst occures.

Plot summary: While enjoying some much-needed rest and relaxation aboard Starbase 104, the crew of the USS Constitution (NCC-9012-B) were rapidly recalled and returned to duty. Under the orders of Admiral Heraan of the Starfleet Logistics Division, Captain Jalana Rajel was tasked with the resupply of a research facility located on a desert moon.

It turned out that this wasn’t going to be a run of the mill resupply mission, as stated by Heraan, “A big quake took out their supply depot, and their landing pad, so they can’t get their usual delivery drops, because they sited their outpost like morons. Which means that if Starfleet doesn’t come to the rescue, they’re going to starve. Which looks bad on the FNS. I’m sure even you can understand that.” Before their conversation came to an end, Rajel was informed that the crew of the Constitution would be given four Argo buggies to assist in the resupply mission.

With the crew recalled, Rajel ordered the senior staff to the holodeck where a training program awaited them. As they entered the program, the staff was met with a character straight out of an old Earth movie. A drill instructor, dressed to the nines in an old-fashioned uniform, and an equally outdated attitude to boot.

Following instructions from the less than pleasant drill instructor, the crew split into four teams and set off in a race of the buggies. As tends to happen during such races, several members of the crew chose to follow the human tendency to pilot their vehicles at unsafe velocities. The course was chocked full of tight and confusing areas to navigate and dangerous wildlife. Near the finish line, there was even a short but ultimately successful battle between two teams and a tyrannosaurus rex.

At the finish line, after commending a team that stopped to help another with the last challenge, the drill instructor started the teams off on their next race when Rajel called for the team to cut things short. The Constitution had arrived at Gamma Orionis and it was time for their actual Argo adventure to begin.

Plot summary: After completing their holodeck refresher training, the crew of the USS Constitution (NCC-9012-B) arrived at their destination, Gamma Orionis. Having been tasked with restocking and helping repair a very remote and inaccessible scientific outpost, the senior staff, led by Capt. Jalana Rajel, quickly departed the Constitution.

Due to the unique characteristics of Gamma Orionis, the crew was unable to use conventional means to use the outpost. The only option they had available to them was to use Argo buggies that had been modified for the mission. “Each Argo will have supplies with them, that need to remain intact. They are loaded in suspended cargo pods, that we will have to attach to the buggies once we arrive. That will make it a bit more difficult to drive, so be careful.” said Rajel as she briefed the crew before departure. After gathering their supplies, and donning Starfleet issue desert uniforms, and splitting into teams the senior staff boarded Argo shuttles and departed for the surface.

Once on the surface, the teams found a mostly desert landscape which was relatively easy to traverse. Soon after their arrival, things began to change. Their easy journey through the desert soon turned dangerous as some natives of Gamma Orionis revealed themselves. The crew was soon inundated by a swarm of insects, which attracted more creatures, large lizards which dined on the insects. Some quick thinking from Rajel and Lt JG Lystra, let the crew out of their precarious position of being caught within the ecosystem’s natural balance, and the Argo teams were soon back on track in getting to the outpost.

As the teams ascended a mountain to reach the outpost, they discovered the outpost to be in much worse condition than they had been briefed on. After a quick decision from the captain, the Argo teams branched off to various parts of the compound to begin assessing the situation and affecting the resupply and repair mission.

Plot summary: After completing their dangerous Argo buggy ride through across Gamma Orionis VIb the crew of the USS Constitution (NCC-9012-B) arrived at the research outpost they had come to resupply. Upon their arrival, the crew found much more damage than they expected and quickly split into smaller groups to help however they could.

One group, led by Capt. Jalana Rajel, headed for a large structure in the middle of the outpost that showed signs of extensive damage. Following Rajel’s lead, the group entered the building, which was partially crumbling due to seismic activity in the area, in search of survivors. They quickly came across some survivors in need of medical aid. After unloading supplies for their Argoes, the group again split as Cmdr. Alex Blair and Lt. Yito Seja ventured further into the structure in hopes of returning power to the building while Rajel’s team stayed put to render medical aid to the survivors.

On the other side of the outpost, another buggy team, led by Lt. JG Jacob Horne sought to render aid to survivors who were inexplicably on the side of a cliff. After reaching the top of the cliff Horne led his team in pulling the survivors back to the top of the cliff. Once back safely on top, the team decided to head towards the outpost’s main generator station to try and get power flowing throughout the compound once again.

Back in the large structure, Rajel and her team continued to assess the situation while helping find survivors. After getting word that the outpost’s main defenses that kept the native wildlife at bay, and hearing from the Constitution that dangerous storms were headed their way, Rajel made the difficult decision to evacuate the outpost. Once Cmdr. Saveron shared the news of the evacuation, all teams coordinate with the ship to get off the surface as quickly as possible.

“It’s a bittersweet moment for me.” said Lt. Rar Th’thelel one of the outpost’s engineering technicians. “I’ve come to think of this place as home, but it was getting pretty tough to keep everything working.”

Working in conjunction with the Constitution, Lt. JG Lystra, among others started using the Argo shuttles to bring both crew and survivors high enough into the atmosphere for the Constitution’s transporters to be able to lock on and beam everyone aboard.