From 118Wiki
(Redirected from Baker, Nathan)
Jump to navigation Jump to search 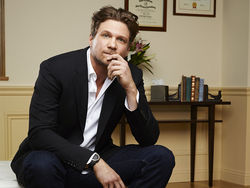 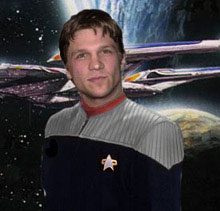 Nathan was always curious about almost everything. He would continuously sneak into the station's cargo facilities and get into his fair share of trouble. His life of mischief ended abruptly when he was eleven years old. It was when he learned of the tragedy of Wolf 359 and the destruction of the USS Melbourne, where his Uncle was assigned. From then on, with minor tendencies toward day dreaming and extended holodeck activities, Nathan started on track to following in his Uncle's footsteps and to become an Engineer. He studied technical journals, examined holographic warp cores, and talked with the many freight captains who visited the station. He even helped as a part-time lab assistant at Jupiter Station's Holo Lab when he was 15.

He applied for and was accepted to Starfleet Academy when he was 17. He progressed nicely through warp mechanics and subspace theory. However, even though he was a good marksman and pilot, he continued on the engineering track through out his first years. Nathan turned in his paper on advanced theoretical warp mechanics in his third year and got high marks. After his cadet cruise at Starbase 118, Nathan graduated from the Academy and was first assigned to the USS Titan.

As Assistant Engineering officer on the Titan, Nathan helped to uncover a plot that would leave Federation diplomatic ties in ruins.

Nathan's third mission on the Titan involved a botched First Contact mission to the Sar'Jal homeworld. After being ambushed by Admiral Kelly's nemesis Hevoc and his undercover agents in the guise of Starfleet officers, Nathan helped liberate the ship.

During the same mission, a freak electrical shock from his EVA suit from a phaser blast left Nathan technically dead. The CMO was able to revive him, but he was left with hypersensitive hearing due to a loss of magnesium in his auditory area. Though his magnesium levels have returned to normal, the hypersentive auditory nerves remain. He was eventually fitted with auditory implants that help suppress some of the incoming stimuli.

After a few more missions on Titan, one as First Officer, Nathan took a sabbatical from Starfleet to ascertain the whereabouts of this parents who were exploring the Gamma Quadrant. When he returned to Starfleet, Nathan transferred to the USS Steadfast and served as Chief Engineer.

After a brief stint back in Starfleet serving on the USS Indria-A, Nathan's thirst for knowledge was too great and he retired from active service to begin work on earning his PhD. After four years of study, he earned a double doctorate in Subspace Mechanics and Warp Theory from Princeton University on Earth. Though he has done several standard papers regarding warp drive and subspace properties, Nathan's focus has turned to understanding the new FTL propulsion technology being applied to Starfleet ships.