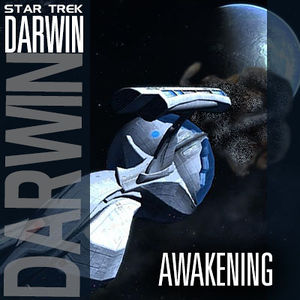 The team led by Lt. Commander Traenor traveled to the planet on the shuttlecraft Santiago, well equipped with weapons thanks to Lt. j.g. Logan, who visited the armory prior to their departure. Once on the planet's surface, the team soon encountered a Borg drone in a sorry state, missing a biomechanical arm and several pieces of its exo-plating. The drone was pulling components from the crash site back to the weapons platform, and exhibited signs of being part of a makeshift collective. The team approached the platform, finding yet another odd sight: two drones, each showing signs of implant rejection, repeatedly attempting to assimilate the other. Lt. Brell determined that they, and all the other drones they had seen, were devoid of nanoprobes. Traenor's team eventually reached the weapons platform and found an encampment of drones at the base, where Logan and Lt. Shayne planned a diversion to allow Traenor and Brell access to the weapons controls. While Shayne and Logan were planning the diversion, another pre-pubescent drone beginning to gain its individuality back started to shadow the group. While both were weary of it, Shayne decided to try and take it under his wing.

Once the diversion was achieved, Brell and Shayne began to work on disabling the weapon's platform. When a security measure was tripped, and the entire base was locked down, the drone Shayne decided to help managed to help the crew out by releasing the lock outs. The team was able to escape, but Traenor ordered that the drone be left behind, due to the tactical dubiousness of the situation. Because of the insidious Borg presence on the surface, Fleet Captain Renos ordered the surface of the planet be cleansed of all Borg life signs and technology through a barrage of torpedoes. The Darwin then returned to Outpost Unity.