Attack on the Yithra Base (Victory) 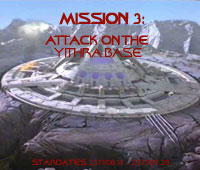 Just prior to the Victory's third mission, Fleet Captain Hollis of the starship Kodiak came aboard the Victory to promote Commander Jordan Hurne to the full rank of Captain solidifying the Victory as Hurne's ship. FC Hollis brought along the Victory's orders for their next mission. Some personnel moves took place as Lieutenant Taffarel DaSilva was appointed as acting Executive Officer replacing Lt. Commander M'Gret who had suffered a nervous breakdown and would leave the ship. Lieutenant Mal Avatar was reassigned as Chief Engineer while Lieutenant J.G. Lotra Dyron replaced Avatar as Chief Tactical Officer.

The Victory's orders were to head to the Basaf system where a Klingon Bird of Prey disappeared. Evidence suggested that the Klingon ship was attacked by renegade Jem'Hadar soldiers. The Victory would assemble two away teams: Lieutenant Story would lead a team comprised of Doctor Parker and Ensign Kora to investigate the Klingon ship, while Lieutenant DaSilva comprised of Lieutenant Dyron and Ensign Colon would investigate the possibility of a Jem'Hadar outpost.

Lieutenant Story's team found a bird of prey severely damaged by an attack. Most of the crew was dead. As they searched the ship, they split up. Doctor Parker was lost momentarily and was replaced by a changeling. Ensign Kora was able to find who he thought was Doctor Parker being held by wary Klingons. Story's team recovered the Klingons and returned to the ship.

While Story's team searched the Klingon ship, Lieutenant Avatar detected traces of a cloaked Jem'Hadar ship in orbit of the planet. Captain Hurne ordered the crew to keep an eye on them, but not to provoke them right away. The changeling who had replaced Parker named Melar headed to engineering. Her excuse was that her communicator had malfunctioned. She then changed her appearance to that of Ensign Gregory. As Gregory, Melar attacked Ensign Kora who was working on the Jefferies tube at Junction 12-B. After subduing Kora, she took his form and reported to the transporter room to assist Avatar who already had suspicions over changeling infiltration after it was detected that additional life signs were still on the Klingon ship.

While Avatar and the changeling (as Kora) were examining the biofilters, Captain Hurne gave the order to destroy the cloaked Jem'Hadar ship. The ship was destroyed easily as her shields were down. The biofilters determined that the changeling was either one of the Klingons or Dr. Parker. Avatar ordered the Klingons under guard and for Dr. Parker to examine them. The changeling returned to the form of Parker and began the examination. Meanwhile, the real Ensign Kora was tied up in the Jefferies tube junction 12-B. An explosion set off by the changeling severely injured the Ensign and caused substantial damage. Avatar while in Engineering was the first to respond to the explosion. He was able to pull the real Kora out of the tube and have the transporter room beam them to sickbay.

But sickbay was not safe for Ensign Kora. Unbeknownst to the crew, the changeling was masquerading as Doctor Parker. While Kora was in sickbay, the changeling as Parker began to operate on Kora. The changeling had removed the eyesight from the young ensign claiming that it was revenge for damage done by Kora's father. Before the changeling could cause further damage, Kora activated a level-12 forcefield and alerted security. As Lieutenant Story was already under suspicion that Parker might be a changeling, his security teams arrived shortly and apprehended the changeling.

Meanwhile, the real Dr. Parker remained on the Klingon ship. She was able to send off a morse code emergency signal back to the Victory. The signal had worked as Chief Windsor was sent to the Klingon ship to find her. The two beamed back to the ship. Parker after recovering immediately began to care for Ensign Kora, where it was shortly determined that his sight would never return.

Lieutenant DaSilva's team found quite a few Jem'Hadar guards lurking around the planet as they attempted to approach the complex. The Jem'Hadar had a limited supply of Ketracel White which was determined by overhearing comments from the soldiers as DaSilva's team carefully spied on them. The team was able to find a complex set of caves nearby the Jem'Hadar installation. It was inside the caves that contact with the Jem'Hadar was made. The team was attacked by a soldier, but they were able to defeat him. As they continued to search the caves, the stormy outside caused a cave in. Lieutenant DaSilva's legs were broken by the collapse.

With the damage caused to junction 12-b, the shields were shut down. Newly crewmembers Ensigns Kobar and Stevok assisted Lieutenant Avatar to get them back online. After the repairs were made, Avatar was ordered by Captain Hurne to assemble a team. Kobar and Stevok would be part of the team. While Counselor Joaquin discussed Kora's emotional situation, Dr. Parker was free to join Lieutenant Avatar's away team that would be sent to the planet to find the first away team.

The second away team beamed down about 2 km away from the first team in another set of caves in order to avoid detection. The journey was not easy as they encountered a river of heat. Once they crossed this river, they were able to locate the other team. Taffaz was freed from the collapsed rocks and the Doctor attended to his injuries. Although his legs were broken, Doctor Parker was able to get him back on his feet. After her task was complete she returned to the Victory to work with Kora.

With the teams united and Lieutenant DaSilva leading the way, the combined away team came up with a plan to knock out the shield generator that was protecting the Jem'Hadar base. Avatar ordered Tactical to beam down some antimatter detonators that would be used in the proposed attack.

While the away team plotted their attack, Doctor Parker back on the Victory began to work on a way to restore sight to Ensign Kora. She proposed adapting a VISOR that would be used to generate images so that Kora's Starfleet career could be salvaged. Parker estimated a 30% chance of success. Kora felt that it was worth a chance and Parker began to operate. The operation was a success, but Kora would be restricted to the use of a VISOR for the rest of his life.

As the away team approached the Jem'Hadar base, Lieutenant DaSilva ordered the team to split up into two groups in order to increase the chance of success. Taffaz would take along Dyron and Colon, while Avatar took Kobar and Stevok along. It was not long before both teams were captured by the Jem'Hadar soldiers. They were taken into the base and placed in separate holding cells.

Avatar's team was successful in breaking out of the cell as Kobar and Stevok generated an electric pulse from a power box near the door. The two ensigns then overpowered the guards at the door and took their weapons. After leaving the cell, they located a Klingon from the Gur'Klag that was being held prisoner. They convinced him to come along and join their attack. The Klingon, who was named Garath, immediately attempted to earn back his honor by attacking Jem'Hadar soldiers near the command center. Garath took a few of them with him, but he perished in the end. The suicidal attack was enough of a diversion for Avatar's team to march into the command center, secure the room, and hold the Vorta hostage. It was at the command center, that Avatar was able to contact the Victory. Captain Hurne ordered Avatar to locate the other team and beam out. The Victory had come up with an alternate plan to destroy the base. Ensign Morg and science had determined that the fusion reactor of the base was unstable and that if they used their weapons, it could destroy the base.

Meanwhile, Lieutenant DaSilva's team was also successful in escaping their cell. While Taffaz was being interrogated, he was able to find a weakness in his restraints. He then overpowered the guard and broke free. Meanwhile, Ensign Colon also broke free of the cell by using some of his offensive skills.

The senior officers took their stations on the bridge and the Victory prepared for planetary entry and a direct assault on the base. It was a rough ride towards the base. They continued firing their weapons and the base fired back. Several explosions hit the insides of the ship and casualties were reported all over the ship. As the ship got closer to the base, a few phaser bursts and a volley of quantum torpedoes took out the base. With the base destroyed, the Victory suffered severe damage from the explosion. A warp core breach was averted by Lieutenant Avatar by diverting more power to the containment pods. The Victory returned to a standard orbit, repaired her damage, and tended to the wounded. The ship would be ready for their next mission shortly.