Atlantis' two Type 8 shuttlecraft are the Voltaire, and the Pembroke.

These are a more streamlined design, having a pointed front and larger warp nacelles, however it has less internal volume. It can be crewed by a single person if necessary but is outfitted for two pilots and four passengers. It has the greatest range of the shuttlecraft aboard Atlantis, with a maximum speed of warp 4. Length: 8.5 metres. Height: 2.95 metres. It is specifically designed for deep-space scouting missions, even though they are actually smaller than the Type 6.

Atlantis' one Type 9 shuttlecraft is the Roanoke.

A far more streamlined design than the type-9, it is the most recent addition to Starfleet's array of shuttlecraft as of 2375. Based on a runabout's design, the Type-11 is twice the size of the Type-9, boasting a dorsal docking clamp and airlock. Type-11s are more heavily armed and shielded than the older shuttlecraft. It also is equipped with a transporter.

Atlantis' two Type 11 shuttlecraft are the B'Hala, and the Elysium. The Elysium was commissioned in honor of the 27 crew that lost their lives during the bot attack on Atlantis in 2395. 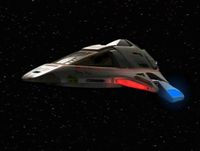 The Atlantis also requisitioned a single Hawkeye class scout ship. The dual-crew vessel is primarily a mobile sensor platform, often used as a redundancy to the Atlantis' long range sensors, so Atlantis has no surprises in the war-riddled Expanse. Unlike the shuttles, the scout ship was not christened with a name, and is simply identified as "Hawkeye-1" in comm traffic.

The AeroShuttle is a large aerodynamic shuttle attached to Intrepid class starships.

The AeroShuttle is docked to the underside of the vessel's primary hull. When detached, it was capable of atmospheric flight as well as interplanetary travel at speeds up to warp 3. The AeroShuttle cockpit is designed for a crew of four.

An AeroShuttle was the term given to the ventrally docking subordinate craft of Intrepid-class starships. The craft was designed for atmospheric operations, and short-term missions as a support vessel, rather than as an independently operating small starship like the Danube class on which it is based. 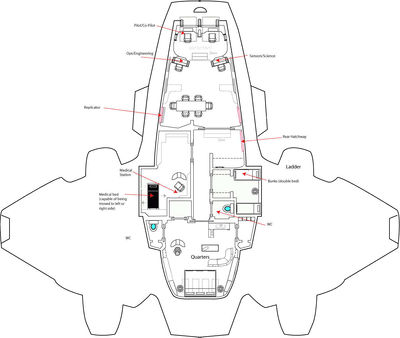 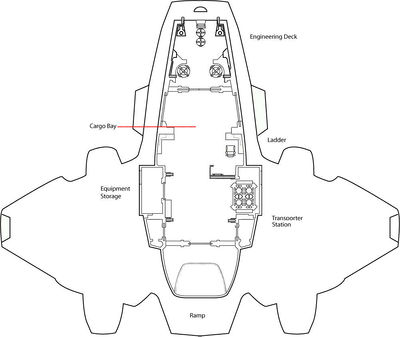 The AeroShuttle was initially conceived as a support craft for the Intrepid class, but some were also assigned to other starships and Starfleet installations. Construction of two prototypes began in 2369, closely followed by 15 production craft, seven of which were assigned to the new Intrepid class ships.

The AeroShuttle was then officially commissioned in 2370 and its success led to the development of the Waverider atmospheric operations shuttlecraft.

In its basic configuration, the AeroShuttle was 24.8 meters long with a 29.6 meter wingspan, and displaced 222.5 metric tonnes. It could accommodate six crewmen on a standard two week mission. It was capable of effective operations within planetary atmospheres ranging from class D to class J and was highly maneuverable in flight. Its sensors were optimized for planetary surveys, but could also be used for reconnaissance or covert operations. All shipboard systems were controlled and monitored by an M-15 Isolinear III Processor.