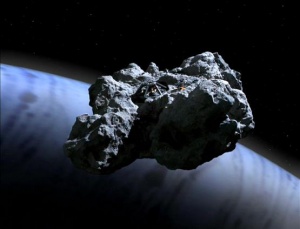 An asteroid is a celestial body that is less than a planetoid, and are responsible for making up asteroid belts.

An asteroid was a solid object orbiting a star that was smaller than a planet, ranging from dozens of meters to hundreds of kilometers in size. Asteroids were often found in an asteroid belt within a star system.

Smaller versions of asteroids were meteoroids, which became meteors or meteor showers in atmospheres, and meteorites on impact with planets.