As the Future Burns (Victory)

239108.11
The USS Victory had spent two weeks on shore leave at Starbase 118, and after some interesting interviews from Starfleet Intelligence, they were cleared and allowed to begin shore leave. The crew got the rest they need and once the USS Victory was ready, they began to make their way back to the Tempest Sector. On the way, they received a distress call from what appeared to be the USS Victory. They found an Intrepid class ship, and after no response Lt. Cmdr Eerie took an away team and found Captain Sundassa Faranster and a few other survivors. This Victory was from the future. It appeared that the ship came from a future star-date in 2414.

The future Victory was in horrible condition and the crew was then evacuated to the present day Victory before their own ship was destroyed. Commander Nugra and Captain Faranster quickly spoke and found that in her future, their nemesis, The Hunger, had destroyed the known galaxy. The reason she had come back into the past was to destroy their ability to enter the galaxy before they unleashed their terror. If the Hunger got a foothold, there was no way to repel them.

One of the only problems with Sundassa's plan was the original entry point of the hunger had been lost in her time. She was able to get a location of an ancient Yeltan listening post that should have the information they need. They were unable to access it as it had been destroyed by the time they found it.

Using the coordinates, The USS Victory immediately proceeded to the Eskelet System and found that it had yet to be destroyed. Away teams were sent down to investigate and discovered an Yeltan AI was still operating. The team's elation was quickly turned to horror when one of the team members, an original member of the future Victory, was found infected with the Hunger DNA virus and was immediately killed by the AI. It expressed its regret, but was unrepentant of its actions.

The AI provided the location of a recently activated Yeltan portal and to their horror, it was in the Duronis System, the home of much of the crew!

As the mission progressed, the USS Victory found herself engaged in operations against the Hunger that have been using a Yeltan teleport gate to infiltrate the galaxy. The Victory used an old slipstream corridor from Dagaro to the Duronis System, to find the gate and a small Hunger ship. Before the crew could prepare for a proper reaction, Captain Sundassa Faranster beamed her team aboard to set explosives, forcing Commander Nugra to send Lieutenant Commander Eerie and his away team to support them. Now, engaged in a struggle with a vastly superior foe, the Victory must survive long enough to recover their team and make their escape.

The Victory was able to use quantum torpedoes to distract the sensors of the hunger vessel and break free from the grip that it had fastened on the intrepid class starship while the teams on the portal were able to detonate their explosives. The Victory and the Laudean Squadron that came to their rescue made their escape from the massive shock-wave and though the portal was destroyed, it is unknown if the Hunger vessel successfully entered or it had been consumed in the fires of the explosion.


On August 22 of 2391, when the ancient Yeltan portal opened, the hunger entered our galaxy and began their conquest. Initially avoiding the Duronis System because of the Laudean ability to block their psionic effect, the Hunger moved forward and began to quietly consume worlds that had yet reached warp capability. It was only mid-july of 2392 when the first Federation starship, the USS Daphne encountered a scavenger class starship. The battle was short and simple, but Captain Harold Fynn was able to transmit a distress signal and images of the attacker before his ship was destroyed. This was the beginning of the war.

Knowing that their existence was now known, the Hunger launched a three prong strike in to Federation, Romulan, and Klingon territory. It was a resounding success as their advanced matter-disruption beams, burst tri-phasing subspace torpedoes, and regenerative shielding cut through the responding fleets. For the first six months of 2392, the Federation was able to hold back the attackers, but the remnant Romulan empire was destroyed and the Klingon empire was fractured.

The first major victory against the Hunger was when the USS Apollo-A sacrificed itself by luring the bulk of the hunger fleet near a red giant star and detonated it as a supernova. The Apollo-A herself did not survive nor did Admiral Jaxx and his crew, but with the destruction of the enemy force, the Hunger changed their tactics.

Fighting against them was sporadic for the next seven years as it is believed the yeltan portal shut down for overuse and it was not until 2399 when they finished the construction of a sub-space amplifier that widened a crack in the galactic barrier letting them enter in droves. It was 2401, when the end truly began.

Over a matter of months, the remnant empires that had pulled together were devastated and the last galaxy wide organized resistance ended at the battle for Starbase 118. The USS Excalibur-A, USS Columbia, USS Gemini were among other ships were destroyed in this three day battle, but in the end nobody escaped.

For the next ten years, the galaxy fought planet by planet, hiding and evacuated from the dominant Hunger forces until 2414, when the USS Victory, under the command of Captain Sundassa Faranster used the highly dangerous sling shot maneuver to hurl her ship around a Class G4II sun in an effort to change the timeline. Suffering catastrophic damage, the USS Victory emerged in August of 2391, just a month away from the initial invasion.

OOC NOTE: This is an alternative future that took place and is subsequently annulled at the end of the mission.

NOTES ON UNIFORMS FROM ALTERNATE 2400s

With the ensuing war, the uniforms changed to provide more protection than the original Starfleet ones did. With the majority of all Federation ships becoming warships, the new standardized uniforms helped protect crew when they encountered Hunger warships. Made of a micro-polysteel weave, they did lower the rate of collateral damage deaths by 30%. 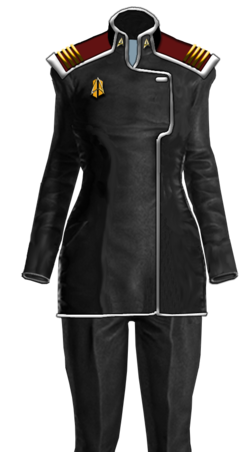 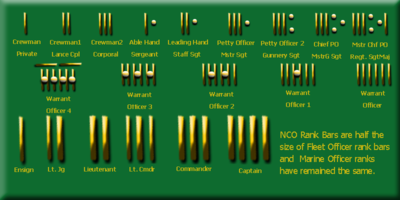