The Main security center, Armory, including Test fire range, and Chief of Security office are located in the middle of the second deck, all three next to one another for tactical reasons.

Security on the USS Apollo-A is split into sub-departments and each has a Security Team Leader who in turn answers to the Chief of Security. All security officers and enlisted are capable of fulfilling any security role and can be retasked as needed.

Security officers and enlisted within this sub-department are considered the ‘face’ of the Division and the people the general public and other members of Starfleet are most likely to interact with. They are usually the first ones on the scene and usually handle the preliminary work for all incidents on the Ship or Federation Facility. Some duties listed below.

The lifeblood of the division, Administration are the personnel that ensure that everything is running smoothly within Security.

Some tasks Admin handles are:

Internal Affairs is concerned solely with all possible lawbreaking and professional misconduct of the Starfleet personnel of the ship and facilities. Their duty is to investigate reported issues and to provide a recommended outcome based upon the results of their investigation to the Chief of Security and Commanding Officer of the Ship or Facility. Their recommendation is almost always followed.

While its members technically report to the Chief of Security, they are able and authorized to go higher to the Second Officer, First Officer, Commanding Officer or the upper echelons of Starfleet Command itself if the circumstances of an investigation call for it.

The Chief of Security's office has a small Tactical Display mounted on the wall to the right of the desk, to the left of the desk is a door which takes the Chief to a small corridor which links with the the other Sub-Department Head Offices and is the main entrance to the CoS Office, at the left of the office is a glass door which bears the logo of Starfleet and the Registry Number of the USS Apollo-A, this leads on to the Security Briefing Room/Security Center.

The Security Center is always manned by members of security. The second turbolift to Deck 2 is right outside the office allowing easy access to it in an emergency.

The armoury is located in a restricted area on deck 2 next to the security centre and is under constant guard. The room is sealed with multi-phasic shielding and can only be accessed by personnel with Beta One security clearance (usually the senior staff). For those needing access to the armoury, the Chief of Security reserves the privilege of permitting limited access to an unspecified section of the ship to any person whose functions, in the eyes of the CoS, require it. Inside the armoury is a work area for maintenance and repair of weapons as well as multiple sealed weapon lockers. Additionally, there are 100 weapon lockers located around the ship, built into the bulkheads, that require a level 1 clearance code.

The heavy ordinance is available in limited numbers and can only be used by those trained and authorized to use them:

Each deck station is a small office with a weapon locker and no doors, for rapid deployment. The room can hold about 10 officers if needed.

Two of the security offices are dedicated to AP, one for CI and one shared with Admin and IA.

The Main Brig is the larger of two on an Odyssey-class ship, this one has 7 standard sized cells all spartan in furnishings and a small area at the rear where the waste reclimators take away the waste and change it into useful energy and replicator nutrients. At the front of the "Cell Block" is a guard duty station for the Brig Officer and any Security personnel given duty.

The small training facilities on Deck 9 are comprised of a small gym, a matted room and a holo firing range. 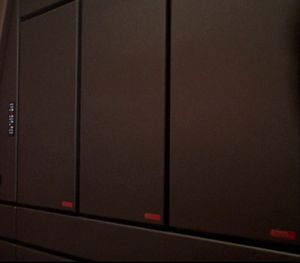 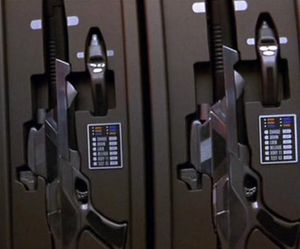 There are 100 weapon lockers located around the ship, built into the bulkheads, that require a level 1 clearance code.