A sentient race of androids inhabiting a class K planet, Mudd-type androids are considered by many to be the precursor to the Soong-type android.

Galor IV, unofficially proclaimed "Planet Mudd" by Harry Mudd, the first human to discover the planet, is a cold planet consisting of 75% landform and 25% ocean. 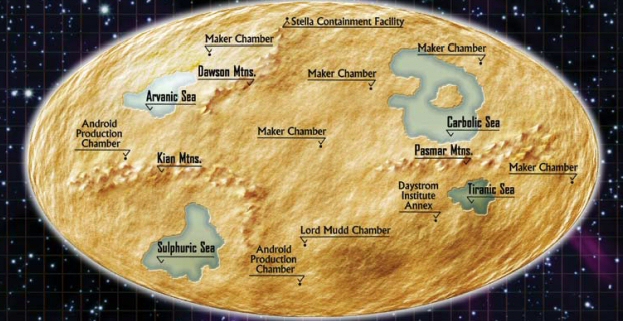 Discovered in 2266 by wanted criminal Harcourt Fenton Mudd, Galor IV is home to an outpost constructed in the 2110s by explorers from the Andromeda galaxy. Left behind by a race known only as the "Makers", a civilisation of androids now remains. When Mudd crash-landed on their planet, the androids rescued him, brought him back to health and accepted his own declaration of rulership over the planet. After an attempt to hijack the USS Enterprise using the androids was unsuccessful thanks to a combined use of irrational behaviour and logical paradoxes to overload the androids' neuroprocessors, Mudd was taken into custody, and the androids remained in control of their own civilisation. 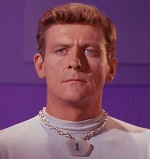 All Mudd-type androids were originally programmed to be servile, and as such they do not have a government in the usual form. Instead, one android, Norman 1, is responsible for the entire population of androids and maintaining their link to the central processor that links them mentally. Norman 1 is often referred to as "the Co-ordinator" by the other androids.

Visually, Mudd-type androids are identical to humans, other than a collar that shows the number that designates the order in which they were produced as a part of their particular series. This collar flashes when the android is processing information, and goes dark should a malfunction occur.

While similar in appearance to humans, Mudd-type androids possess strength far beyond human average. Their internal circuitry can be accessed via a plethora of access panels, in various locations around their body. The Mudd-type androids' skin is fashioned from self-renewing plastic, which is stretched over a beryllium-titanium skeleton. The estimated lifespan of a unit is 500,000 years.

The overriding desire of a Mudd-type android is to ensure that those they serve are happy. In some circumstances, however, and particularly where input from multiple sources is conflicting, the interpretation of happiness may be perverted or ignored. To a large extent, it is possible to alter the programming of such androids to achieve a desired effect, and indeed more androids may be created with certain personality traits, at the discretion of the individual who orders their production.

Able to pool intelligence and processing power through a central processor, an individual Mudd-type android may possess the intelligence of many individuals (if present with them on Galor IV), although all androids in this series are unable to process continued instances of flawed or incorrect logic, or extremely irrational and unpredictable human behaviour.

The Mudd-type androids are essentially divided into a variety of different sub-races/classes, each consisting of up to 500 units. Each particular class exhibits strengths in different skill areas, and is named after the original model of android in each production set. Examples of a selection of different classes of android are displayed below. With the exception of Norman 1, number is not used to denote the rank or status of a particular unit. As such, Alice 263 is of equal importance to Alice 5, and so on.

Inherently curious, due to their original programming from the Makers, Mudd-type androids enjoy engagement in the pursuit of technological, artistic and scientific advances. They are in possession of an extensive library of computer information, and are capable of providing equipment capable of expanding and extending the knowledge and expertise of the Federation in the fields of science and engineering. These resources often prove invaluable in the androids' quest to make their masters happy.

By 2364, the Federation had established an annex of the Daystrom Institute on the planet Galor IV, with a specific focus on the development of cybernetics and robotics. Considered to be sentient, Mudd-type androids are considered the forerunners to Soong-type androids in many respects, although their construction is largely different.

The androids themselves are in possession of technology that is on the cutting edge of that possessed by the Federation. Their scientific and engineering equipment is still being studied by members of the Daystrom Institute, and their medical technology is among the most advanced in the quadrant. They possess the ability to transfer the human mind into an android body, although such a procedure is never undertaken on the planet due to issues with medical ethics.

Galor IV is a valuable gem in Federation territory due to its richness in essential mineral resources. In addition, areas of the planet have been converted into holiday domes, attended by scores of android servants. Such domes have facsimile landscapes in a variety of different styles, from expansive beaches to quiet woodland retreats.

Mudd-type androids are seldom militant. The only recorded cases of violence pertaining to this species have been as a direct result of Harry Mudd's influence on their programming.

Content from this article may have
come partially, or entirely from
Memory Alpha
Retrieved from "https://wiki.starbase118.net/wiki/index.php?title=Android,_Mudd-type&oldid=142819"
Categories: