From 118Wiki
(Redirected from Anassasi, Jessa)
Jump to navigation Jump to search 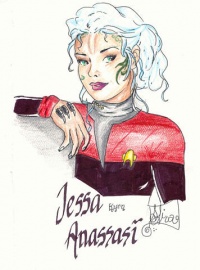 Rear Admiral Jessa Anassasi was the Commanding Officer of the USS Independence-A. She was recalled to StarFleet Command on stardate 238509.15.

Jessa belonged to Clan Cleone of the Cleone Colony. Her parents were members of the elders council of the clan. Cleone Colony was destroyed on stardate 236304.25 in an attack by the Gatherers. Both Jessa's parents and elder brother were killed in the attack. Jessa and her younger sister were sent to live with Kirith's brother, Dalon Anassasi of the Draegon Clan. Jessa grew up under the watchful eye of her uncle. Dalon Anassasi was set against either of his nieces joining the fight against the Gatherers, having lost one brother and both sisters in battle against the Gatherers. When Jessa was 14, she was initiated into the Draegon's Warriors. She fought the Gatherers during the next two years, losing friends, sheildmates, and kinmate in the skirmishes. Growing tired of the losses she had endured, she turned her hopes elsewhere. On stardate 237005.24 Jessa applied to Starfleet academy despite Dalon's objection. She was accepted one year later.

Jessa suffered a genetic mutation on the planet Kismett. Believed to be induced by a Breen genetic virus, the effects were not fully reversible.