Amity Outpost is a Federation Diplomatic Corps installation based beside a rare regenerating benamite crystal field in the Nuriootpa solar nebula, a developing solar system within the larger Barossa Nebula in the Barossa Sector in the Delta Quadrant. The station is positioned approximately 4.1 million kilometers from the center of the solar nebula's protostar. The benamite crystal field is a beautiful asteroid field clouded by the gases of a translucent purple nebula, stretching for almost half a lightyear in each direction. Benamite crystals (which are essential for quantum slipstream travel) form naturally in the area, but the chemical reaction of the nebula enables the unusual regeneration of this precious resource. It was discovered by Betazoid scientists sponsored by the Second House of Betazed surveying the area.

Ambassador Vataix is supported by a Deputy Chief of Mission from the Federation Diplomatic Corps as well as a Starfleet attache, Cmdr. Wil Ukinix who serves as her “first officer.”

Following nearly two decades of operation, Copernicus Station was transferred in the 2390s to the Federation Diplomatic Corps and moved into the Delta Quadrant to act as the Federation’s new welcome center and diplomatic outreach facility for the area after Starfleet vessels with quantum slipstream drives began making serious expeditions into the previous unexplored quadrant. The overhaul, move, and reassembly of the outpost was overseen by Commander Tristam Core, who serves as its Chief of Operations (the equivalent of chief engineer aka Chief O’Brien on DS9). It was formally renamed Amity Outpost to reflect its new mission of peace and understanding through mutual friendship between the Federation and the species of the Delta Quadrant. 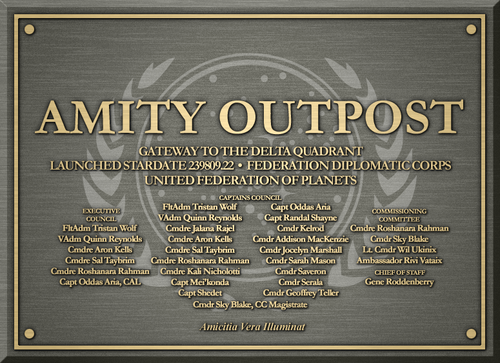 Amity Outpost Dedication Plaque, displayed on the ground floor of the Grand Mezzanine.

Pennants earned by the crew of the Amity Outpost during the year 2398.