Amity Outpost is a Federation Diplomatic Corps installation based beside a rare regenerating benamite crystal field in a purple colored solar nebula the Barossa Sector in the Delta Quadrant. The station is positioned approximately 4.1 million kilometers from the center of the solar nebula's protostar. The benamite crystal field is a beautiful asteroid field clouded by the gases of a translucent purple nebula, stretching for almost half a lightyear in each direction. Benamite crystals (which are essential for quantum slipstream travel) form naturally in the area, but the chemical reaction of the nebula enables the unusual regeneration of this precious resource. It was discovered by Betazoid scientists surveying the area. 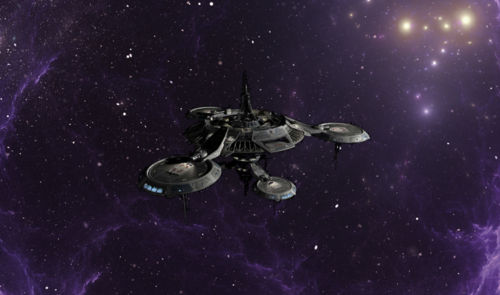