Addison MacKenzie, M.D., Ph.D., FASFS is the Assistant Chief Medical Officer aboard the USS Veritas. Born in Cambridge, Massachusetts (Earth), Addison is one of the leading specialists in Microsurgery in Starfleet. A non-traditional officer, MacKenzie was educated at some of Earth's finest institutions, earning degrees in sociology, anthropology, and epidemiology, and completed a medical fellowship in microsurgery before attending Starfleet Academy. It is her hope to one day become Chief of Surgery at Starfleet Medical. 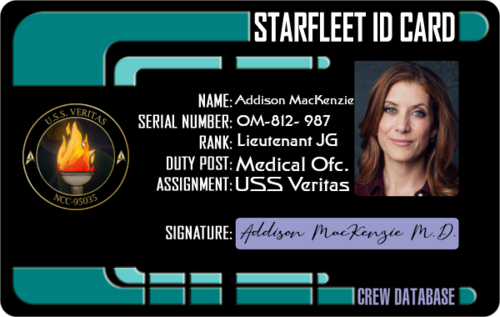