From 118Wiki
(Redirected from Sevo, Ayiana)
Jump to navigation Jump to search
This page or section is undergoing an expansion or major revamping. Comments regarding possible improvements are welcome on the article's talk page.
This notice was placed here by Ayiana Sevo. Fired my lazer at this page. It'll look much better when it's fixed. (100% more Crazy guaranteed!)

Ayiana's passion is science. She has always wondered how the world works. As a child, she would spend nights looking up at the stars. She can normally be found with her face buried in a PADD or book. Ayiana is particularly gifted in pattern recognition and attention to detail. Some of her ideas and theories are pretty ambitious, such as her work on improving her primary passion: Quantum Slipstream Drive. Fortunately, all the ships Ayiana has served on has had QSD installed, usually for the first time. Her dream is to one day command a Vesta-class starship.

She is introverted, shy and nervous, mostly in large groups. Ayiana has never liked social gatherings, preferring to spend her free time alone; usually reading a book or working on theories. When Ayiana has her mind on science, she can get pretty eccentric to the point of being oblivious to the otherwise obvious around her. While normally a shy talker, Ayiana opens up and speaks "technobabble" once she talks about a subject she likes. In recent years, Ayiana has developed a detrimental anger management issue. She has frequently lashed out at people with a short temper.

At first, Ayiana was very reluctant to be in any sort of leadership position; mostly because of her shyness. Events quickly placed her in command of the science department on board the USS Victory. She was forced to learn to show strength and leadership quickly. For the most part, she let her department do what they like, so long as it didn't interfere with the current mission. After several months as a department head, Ayiana had become comfortable in the role. During the Gorkon's "Year of Hell," Ayiana was given bridge command duty. At first, she was intimidated and nervous, but over time, she became used to it; partly out of the necessity in the Gorkon's desperate situation. Eventually, Rear Admiral Quinn Reynolds offered Ayiana the chance as First Officer. She was only in the role for a short time before being removed; in addition to having trouble with the workload, Ayiana was still having trouble with emotional outbursts. 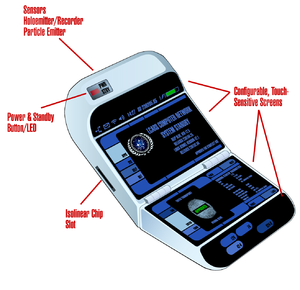 Ayiana was never particularly ambitious, but circumstances very early in her Starfleet career quickly rocketed her up the ranks. Within half a year upon being posted to her first assignment, the USS Victory, Ayiana was a Lieutenant and Chief of the Science Department. At first, Ayiana was reluctant, and pretty overwhelmed, with the prospect of running an entire department. However, she eventually became satisfied with the position. She has not ruled out the possibility of command one day. In fact, her dream is to one day command a Vesta-class starship.

Her other passion remains firmly in the realm of the sciences. Ayiana frequently writes articles within the scientific community, and hopes to one day earn the coveted Nobel Prize or Zee-Magnees Prize. 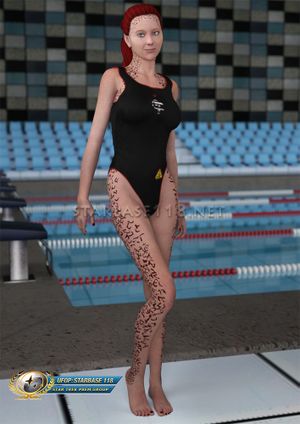 Ayiana on the Academy swim team.

Without a doubt, Ayiana's most important accomplishment in her early life was being Joined. It is an incredibly difficult and arduous path to be chosen, and almost all applicants fail or drop out. While she thought the Joining would be completely beneficial to her, Ayiana eventually discovered that there was a lot more to being Joined than simply gaining memories of past lives. She also acquired the positive and negative aspects of each prior hosts' personalities; from gaining the ability to understand music, to fear of claustrophobia.

Being a bookworm and knowledge geek, Ayiana was thrilled to finally get her Starfleet diploma in multiple disciplines - specifically Quantum Mechanics and Subspace Mechanics. She also received a minor in Astronomy.

Ayiana is particularly proud of her swimming skills, as it is a skill wholly her own, and not gifted by the Joining. During her attendance at Starfleet Academy on Trill, Ayiana placed in the top five for the 400- and 800-meter laps, as well as being adept at diving.

A major setback in her career is Ayiana's emotional troubles. She has inherited a short temper from her Joining, the source still not fully understood. It has caused numerous issues in her Starfleet career, usually revolving around minor assaults of dignitaries or fellow officers. It even cost her the brief role of First Officer aboard the Gorkon. Ayiana realizes that if she truly wants a command one day, she has to master and control her emotions.

In addition to the standard-issue Starfleet furnishings, Ayiana's quarters were heavily decorated with astro-related paraphernalia, such as meteorites and crystals. Paintings and photographs of nebulae and planets hung on the walls. She has a small stone statue of Lessia, an ancient Trill goddess of knowledge and wisdom; not out of religion, but more as a reminder of her scientific dedication. Ayiana also owns a small electronic keyboard she plays from time-to-time. A perch sits in one corner for Tana, her beloved pet fenza bird. Her work desk is the most personalized. Above it is a large photo of the planet Trill, with a metal sculpture of the Trill emblem, Ayiana's Academy diplomas, and official Starfleet photographs of Jadzia Dax and Ezri Dax also hangs nearby. Dax - particularly Jadzia - had been idols of Ayiana since she was a child, and she greatly influenced Ayiana's interest in the sciences. She kept the photos by her desk to often remind herself what Jadzia would do in her situation.

Ayiana is quite introverted and doesn't socialize very often, except for official ship functions. When she does partake in public places, she tends to keep to herself. She has had two romantic relationships; both have been disastrous. Over the years, Ayiana's introverted nature has softened slightly, and there are a number of people who have managed to break through her shields and form friendships with Ayiana; or at the very least gained her respect.

She continues that role on the much larger Sovereign-class U.S.S. Gorkon. Ayiana is finding it difficult to keep up with the increased supervisory load of the Gorkon's science department, as it is over three times larger than the Victory's; one which Ayiana was struggling to maintain as well. In February of 2395, Admiral Quinn Reynolds offered Ayiana the role of First Officer, which she accepted.

Much to her surprise, Ayiana has acquired an impressive array of awards and commendations in her short time in service. They range from a Purple Heart to several Lifesaving Ribbons, and an Innovation Ribbon.