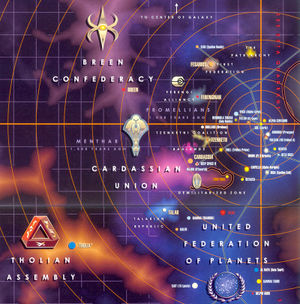 Star chart showing the Menthar Corridor lying between the Breen, Tholian, and Cardassian powers and its relation to the United Federation of Planets

The Menthar Corridor is a vast area of space once occupied by the ancient Menthar civilization. The region lies between the Cardassian Union, Breen Confederacy and Tholian Assembly and is previously unexplored by Federation starships. In 2388, the USS Mercury was the first Federation ship to enter the Menthar Corridor via special arrangement with the Cardassian Detapa Council. After the Mercury was nearly destroyed in late 2390, the USS Garuda was assigned to continue her mission, and in 2392 she was replaced by the USS Invicta and joined by the USS Gorkon. In 2393, the Gorkon was reassigned to the Tyrellian Sector.

In 2395, the Invicta Expedition stood down and shortly after, Astrofori One was destroyed by the Tholians. Two years later, the USS Thor was reassigned to the sector after the Duronis II Embassy was mothballed, it's mission fulfilled.