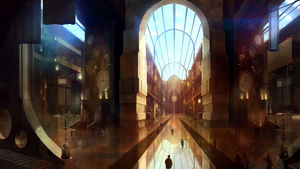 The Berengaria Caucus is an annual gathering and open forum for ideas held on Berengaria VII.

The Berengaria Document, signed by Vulcan, Andoria, Tellar, and Earth, was a statement of common values and ideals among the assembled worlds when the Federation proper was still a nascent idea. It outlined comprehensive concepts of citizenship, sovereignty and interstellar law that would eventually give rise to the Federation Charter. In the late 22nd century, the Berengaria Caucus was started by T'Shar of Vulcan and her New Federation movement to serve as a free and open intellectual arena, in the spirit of the Document. While the New Federation Movement quickly declined, the Caucus continued and came under the direction of the Berengaria VII government, which has organized it annually ever since.

Everything one can think of is discussed in the Caucus, and many regard it as the high point of interstellar discourse. So called "dangerous ideas" and unpopular opinions are never shunned, and the only rule is that the decorum of the Caucus be maintained and that speakers discuss and debate in a respectful manner.

Indeed, very few of the workshops ever turn heated, and the Berengaria Caucus is known for its sincere and calm exploration and discussion of ideas. Much like a classroom, the point of the Caucus is to explore ideas, not to declare a winner in an intellectual battle or determine the moral superiority of one view over another.

The Presidential Panel puts the Caucus center stage in election years, with most candidates choosing to attend to get their messages out to the citizenry.

FNS Articles on the 2392 Berengaria Caucus