Andaris. It is the Denobulan word for "peacekeeper," in the sense of rendering aid as opposed to enforcing peace. The word was chosen to name Starfleet's newest Task Force, assigned to the Par'tha Expanse. 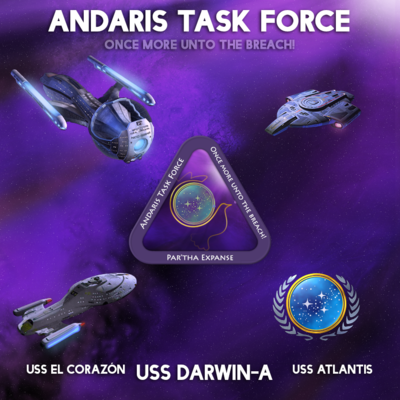 There are about 70 systems in the Expanse, roughly a fifth of which have inhabited worlds which are heavily settled. Other systems also have settlements, but much smaller ones: research stations, military outposts, mining facilities, and so on. The United Federation of Planets has been involved with trade and diplomatic talks with non-aligned worlds in the Par'tha Expanse since 2382. However, agreements were slow in materializing, primarily due to the presence of the Valcarian Imperial Republic - an extremely militaristic and expansionist society. Their presence predates the Federation's arrival, and they view the Federation as direct opposition to their empire.

There are many political factions in the Expanse and there has been an unspoken and uneasy truce between them for a decade. As tensions increased a deal was brokered - the Federation was allowed to keep their presence on Deep Space 26 and minimal support vessels. However, they were required to withdraw the majority of their fleet and abandon their "forward base," Outpost Ganzera. In return, the Valcarians would not immediately lay waste to the martially inferior worlds of the Expanse. While the Federation sympathized with the plight of the Expanse, they were not prepared to go to war and in 2392 reduced their presence to a minimum.

The Valcarians continued to press their advantage, knowing that the Federation was either unwilling or unable to counter them. The indigenous species of the Expanse pleaded with the Federation for help against the Valcarians, and the lack of response created animosity where none existed before. Things reached breaking point in early 2393 when Valcarian interest in the Expanse was renewed. Threats were made, shots were fired and the Caraadian noble houses of the Expanse Sector went to war with the encroaching Valcarian Empire, though neither are currently strong enough to make much headway.

Should the Valcarian Empire succeed in winning the war with the Caraadians, they would move against the Freeworlds next. Therefore, Federation involvement might be the region's only means of successful survival and freedom. In fear of what may happen, the closer independent worlds of the Freeworlds Region decided to align themselves politically. Consequently, they created a Star League and the Federation has been invited to participate.

In 2393 Starfleet decided to commission a group of starships, called the Andaris Task Force, with the intention of helping to stabilize the region and strengthen ties with the Freeworlds. Rear Admiral Renos was appointed Region and Task Force Commander for the Par'tha Expanse and given four ships under nir command - the Olympic class USS Blackwell, the Intrepid class USS Atlantis, the Defiant class USS El Corazón and the Horizon class USS Darwin-A.

On stardate 239410.09 Commander Brell was given command of the USS Atlantis.